The January 2022 issue of Dispute Resolution Magazine reports results of a survey of past contributors conducted by Editorial Board co-chairs Andrea Schneider and Michael Moffitt.

This post uses some of the survey responses to suggest that we recognize the legal profession and judiciary as part of the dispute resolution field.

Here’s how it used to be:

I started practicing as a mediator almost twenty-five years ago, at a time when use of mediation by litigants in civil cases was still rare.  In the nearly twenty years I practiced as a litigator, I was involved in two mediations.  We referred to mediation at the outset as a method of “alternative” dispute resolution, because it truly was just that – an “alternative” to the traditional methods of litigation by trial, motions, or party-to-party or lawyer-to-lawyer settlement.  (Wayne Thorpe)

Twenty years ago most attorneys either didn’t know about ADR or perceived it as a threat to the legal profession.  (Alex Yaroslavsky)

The following diagram illustrates the relationship, though not precisely to scale. 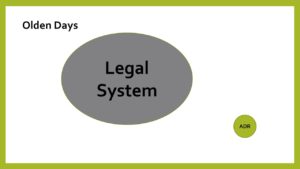 Several survey respondents suggest that we recognize the work of lawyers and judges as inherently dispute resolution.

Dispute resolution (as we know it) is the work of good lawyering. … A good lawyer simply practices effective, efficient compassionate problem-solving, looking for substantive and procedural justice.  And that lawyer IS an expert in (alternative) dispute resolution.  (Bobbi McAdoo)

I wish we could better incorporate practicing litigators and transactional attorneys into our field so that we could better eliminate the disconnect between them and us.  (Jean Sternlight)

In-house parties were absent from the table until ten years ago.  (Mirèze Philippe)

Both the Section and Dispute Resolution Magazine would further benefit by recruiting not just the neutrals and other ADR professionals, but also those who regularly use and benefit from ADR – including more judges and court personnel, business people, litigation attorneys, government agency officials and staff and other stakeholders … . (Larson Frisby)

We might think of the legal profession, judiciary and dispute resolution fields (without the “A”) as three overlapping circles reflecting shared values and interests.  Part of each circle is part of the others – and part is not.  The following diagram illustrates the relationship, though again obviously not to scale.

Sometimes people use the concept of a “big tent” suggesting an openness to inclusion of people with different roles or perspectives in a single metaphorical group.

I expressed this theme in a concisely titled article, Shifting the Focus from the Myth of “The Vanishing Trial” to Complex Conflict Management Systems, or I Learned Almost Everything I Need to Know About Conflict Resolution from Marc Galanter.

Rather than making procedures the protagonists in these stories, we should celebrate humans and their wise and caring actions when working with conflict. This includes judges and lawyers who choose between the various procedural options (including, but not limited to, trials) to promote appropriate goals for litigants and societies.  Judges can make some of their best contributions by helping design and manage disputing systems as well as trying cases.  We should celebrate prosecutors and other government officials who investigate and prosecute wrongs including the full range of illegal acts including human rights abuses, corruption, discrimination, and violence.  Mediators and arbitrators are often heroes, helping people work through conflicts.  So are inside counsel who mediate between business executives and outside counsel to manage conflicts effectively.   And so are many unsung heroes who manage conflict every day with little outside recognition.  These include military and police officers, legislators, organizational, community, and religious leaders, teachers, parents, and countless others.  Although one can find examples of such stories, they do not seem to predominate as the myths that resonate most for many people in the legal and dispute resolution fields.

Responses from the Magazine’s survey quoted above suggest that it’s time to explicitly welcome judges and lawyer-advocates as part of “our” field.  I discussed this idea in a 2015 post, What is (A)DR About?  I concluded:

One could think of DR as processes of planning, managing, and/or resolving disputes or something like this. This would include pretrial litigation and trial because DR isn’t limited to processes that are private or involve party self-determination as noted above.

This definition isn’t completely satisfactory because it would include people in our community (such as most lawyers and judges) who don’t identify themselves as part of our community and aren’t recognized as such by established members of our community.

It still feels a bit weird to include lawyers and judges, but I suggest that we get over that.  Dispute resolution is at the heart of their work.

Of course, lawyers negotiate and represent clients in “ADR” processes all the time.

Obviously, judges adjudicate disputes – but so do arbitrators, who we universally recognize as part of our field.  Judges frequently conduct settlement conferences, similar to mediation.  Private mediations sometimes are criticized as being similar to judicial settlement conferences – which makes the point about the nature of judges’ settlement activity.  Judges and court administrators are some of the biggest boosters of dispute resolution, and many of them manage court-connected dispute resolution programs.  As Jim Coben’s article in the Magazine demonstrates, judges frequently adjudicate issues related to mediation.  There is a substantial jurisprudence about arbitration.  Judges regularly speak at our conferences, lauding our work.

The big difference between judges and practitioners who are universally recognized as part of “our” field is that judges are public employees.  But so are court-employed mediators.

Presumably some judges and lawyers would feel weird to include self-identified dispute resolution practitioners as members of their fields, though some lawyers and judges probably feel that retired judges acting as neutrals are regular parts of their professional circles.

Being part of overlapping fields doesn’t require membership in the same organizations or regularly attending the same events.  It can involve shared visions, goals, and actions.

“Enlarging the tent” creates some problems, as suggested in this post summarizing my old study of the future of our field.  But continuing in a cramped metaphorical tent is problematic too.  It doesn’t reflect the reality of contemporary dispute resolution, and it doesn’t recognize important allies as being part of “us.”

Many lawyers and judges share values and aspirations of people who identify with the traditional “ADR” field.  The next post suggests how we collectively can develop realistic theories of change to advance shared goals.